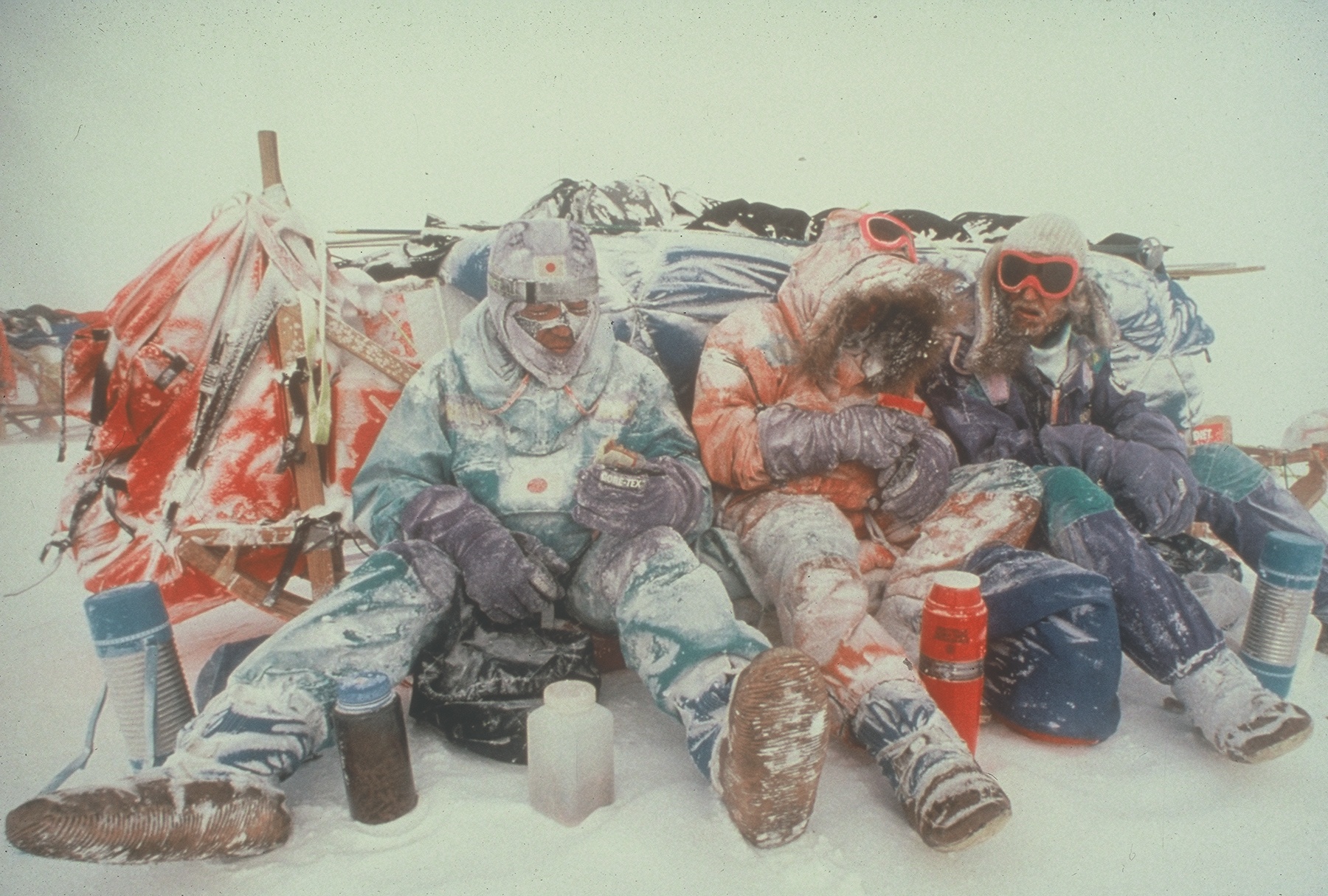 THINK SOUTH FOR THE NEXT
SPECIAL EVENT

30 years ago from now, the world's first dogsled crossing of the Antarctic continent, which is the only continent that does not have a border on the earth, was embarked with a message of “THINK SOUTH” that appeals the environment issue and peace in their heart.
This International Trans-Antarctica Expedition consisted of 6 members from 6 different countries(USA, UK, France, Russia, China, and Japan).
On December 11, passed the south pole, and On March 3 of 1990, they completed this 4000 miles journey and reached the goal safely.
In this event, screening of Japanese premiere of a documentary movie, “Trans-Antarctica Expedition” and a talk event by the 6 expedition members about the message toward the future founding their memory will be presented.

On November 10th(Sun), “THINK SOUTH FOR THE NEXT Symposium” will be held at Tokyo International Forum. The ticket will be available at Ticket Pia from September 20th.

For all visitors of this symposium with a ticket, “Dog Sledding Crossing the Antarctic continent. 30 years anniversary reprinted edition / by Keizo Funatsu” and THINK SOUTH FOR THE NEXT scarf which is not sold in store will be distributed at the venue. 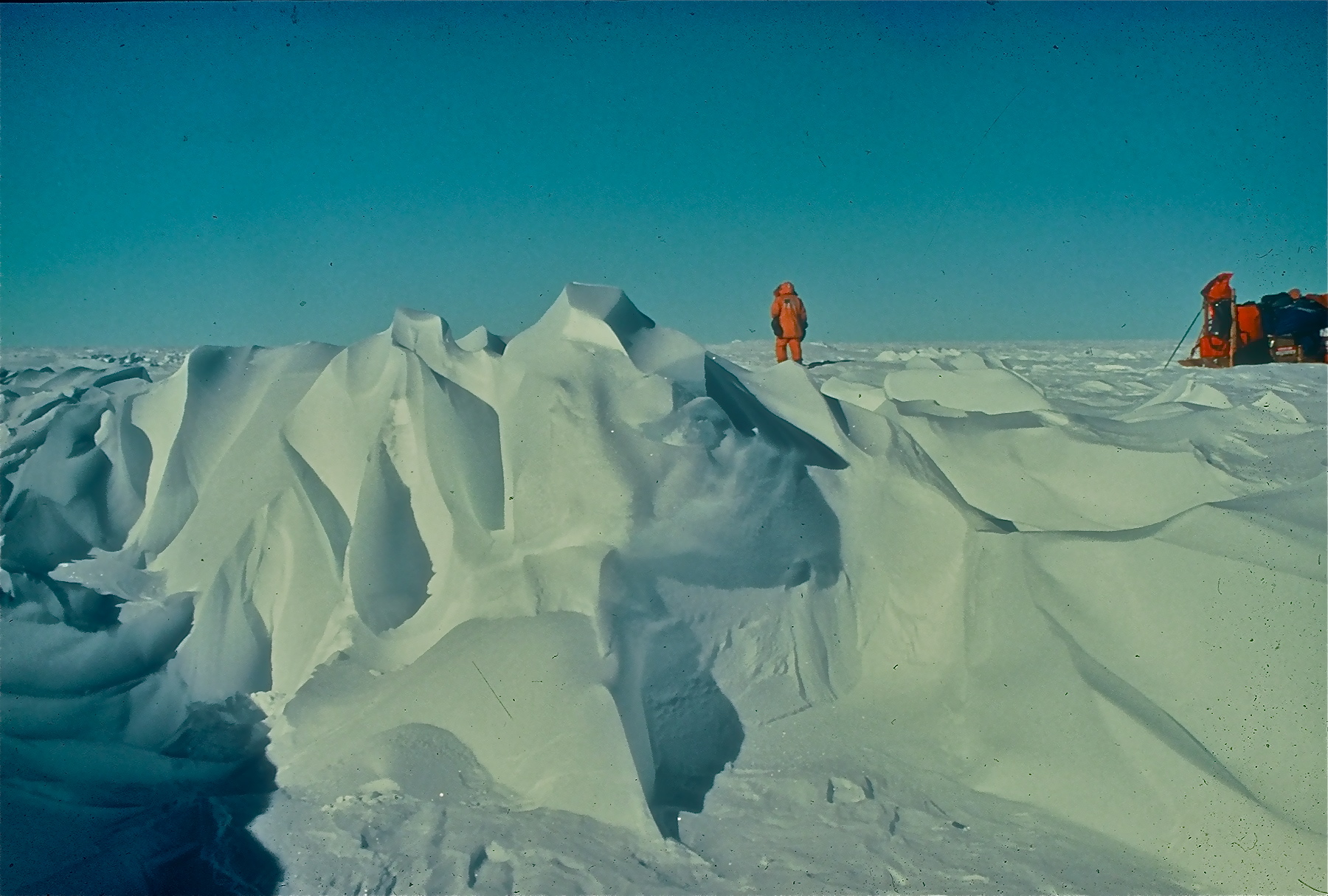 A symposium where 6 adventurers who archived the world's first dogsled crossing of the Antarctic continent gather will be held on November 10th(Sun). The ticket is available at Ticket Pia. Also, Japanese premiere of a documentary movie, “Trans-Antarctica Expedition” which follows these 6 explorers will be screened. The trailer of this film will be released from September 20th. >PDF (in Japanese) 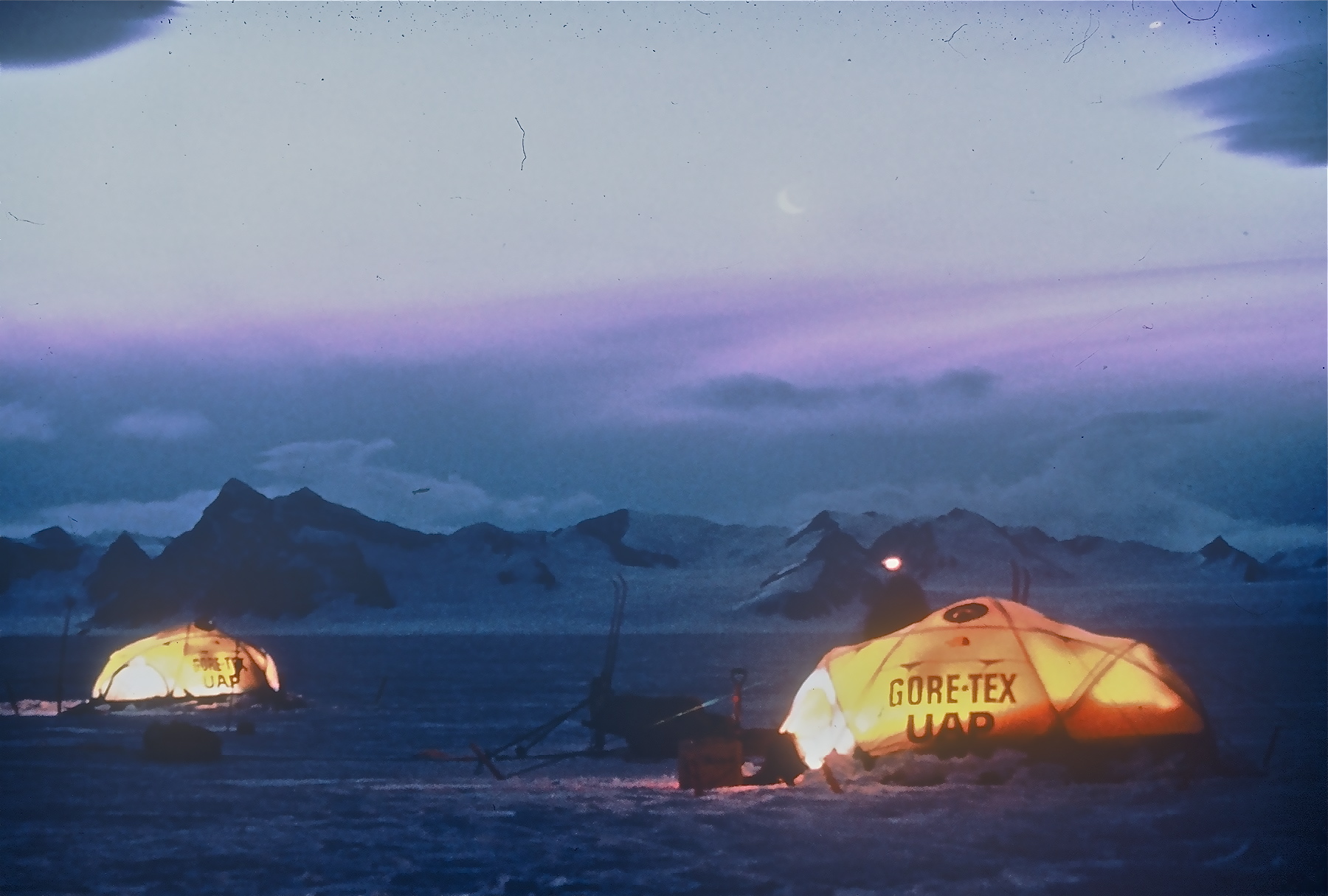 10.20 FM Festival 2019 Class of Future Pre-special
「What the earth teaches us ～THINK SOUTH FOR THE NEXT～」Public recording

11.10 THINK SOUTH FOR THE NEXT Symposium will be held at Tokyo International Forum Beautiful sunset at Antarctic Peninsula. (There was still night.) 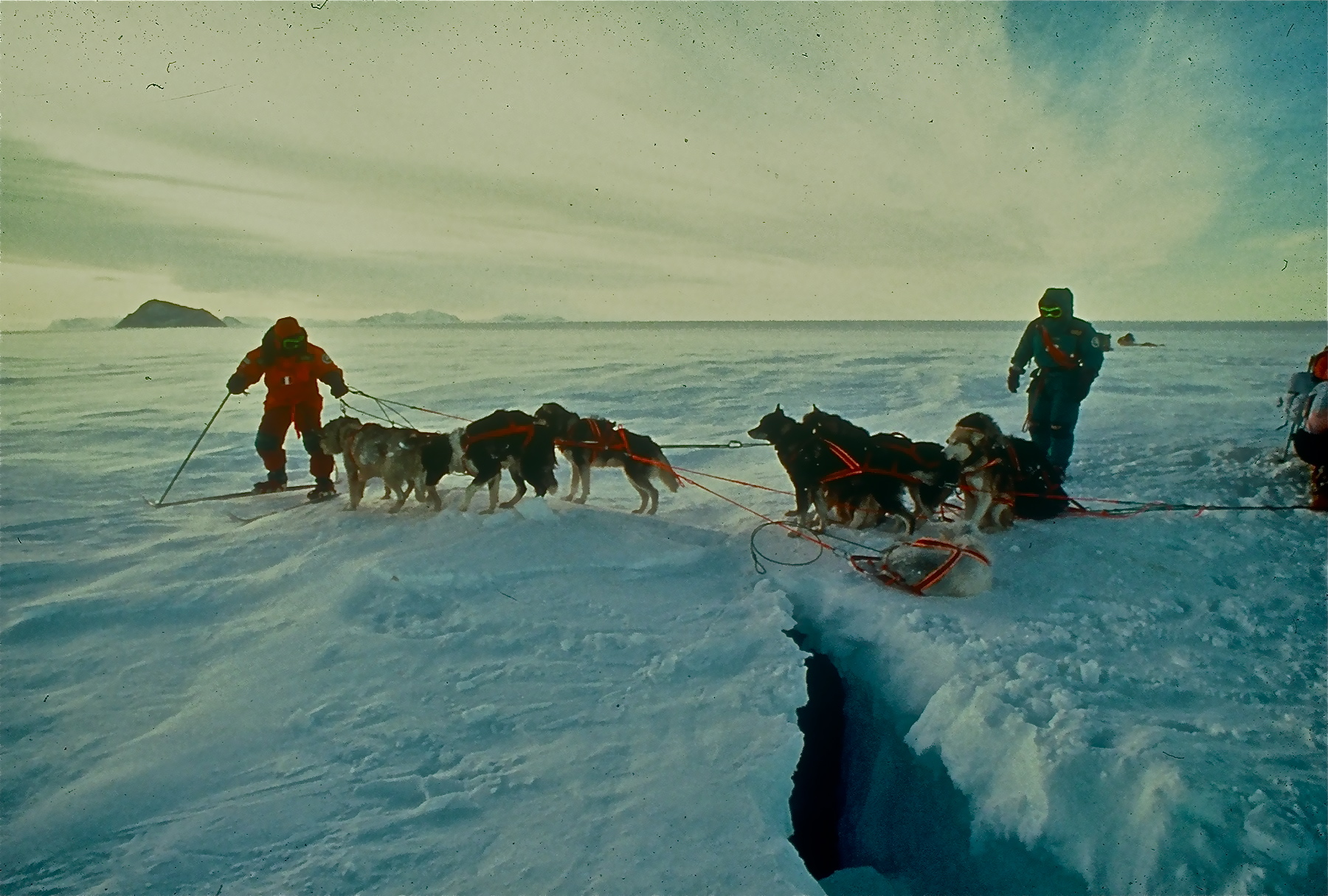 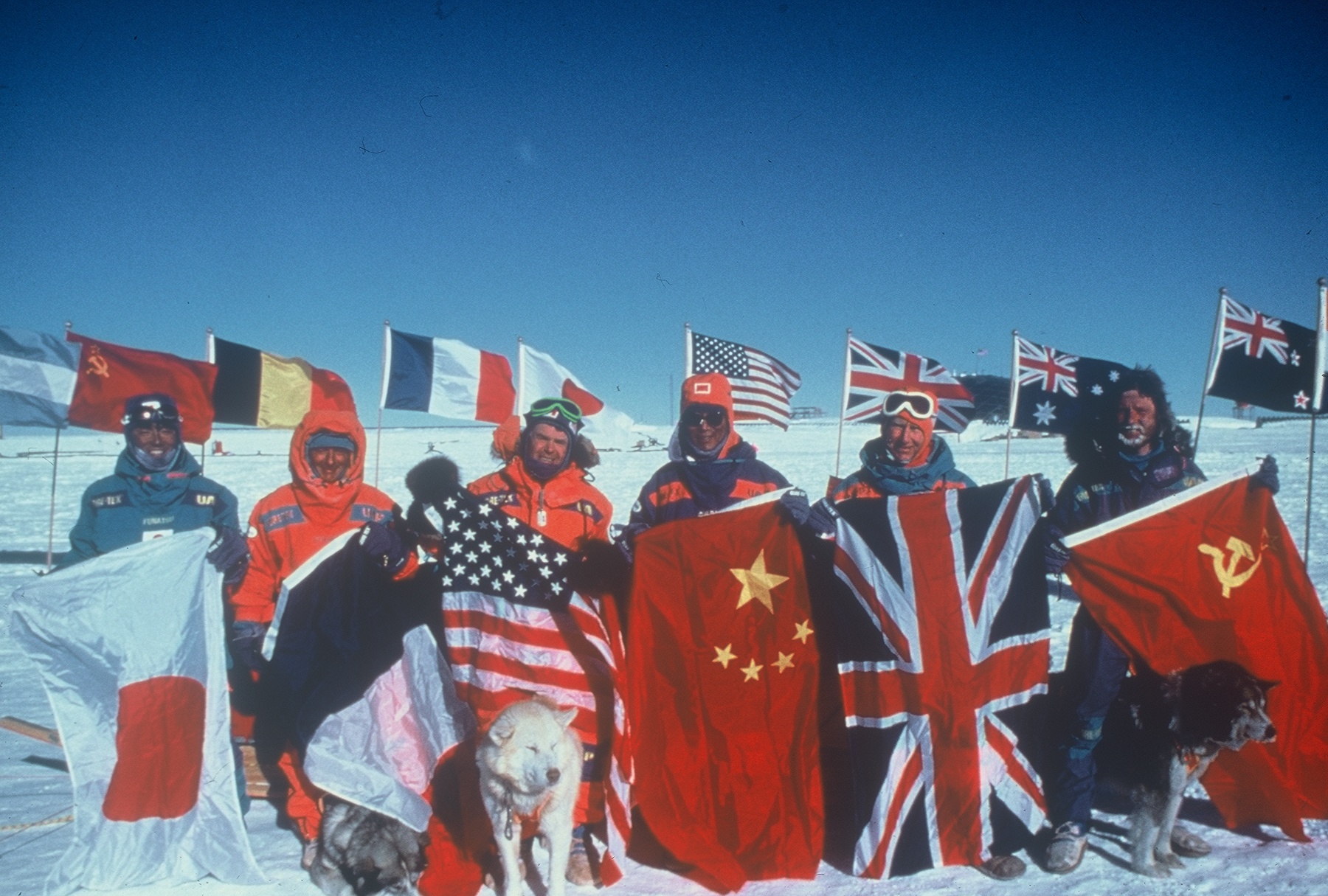 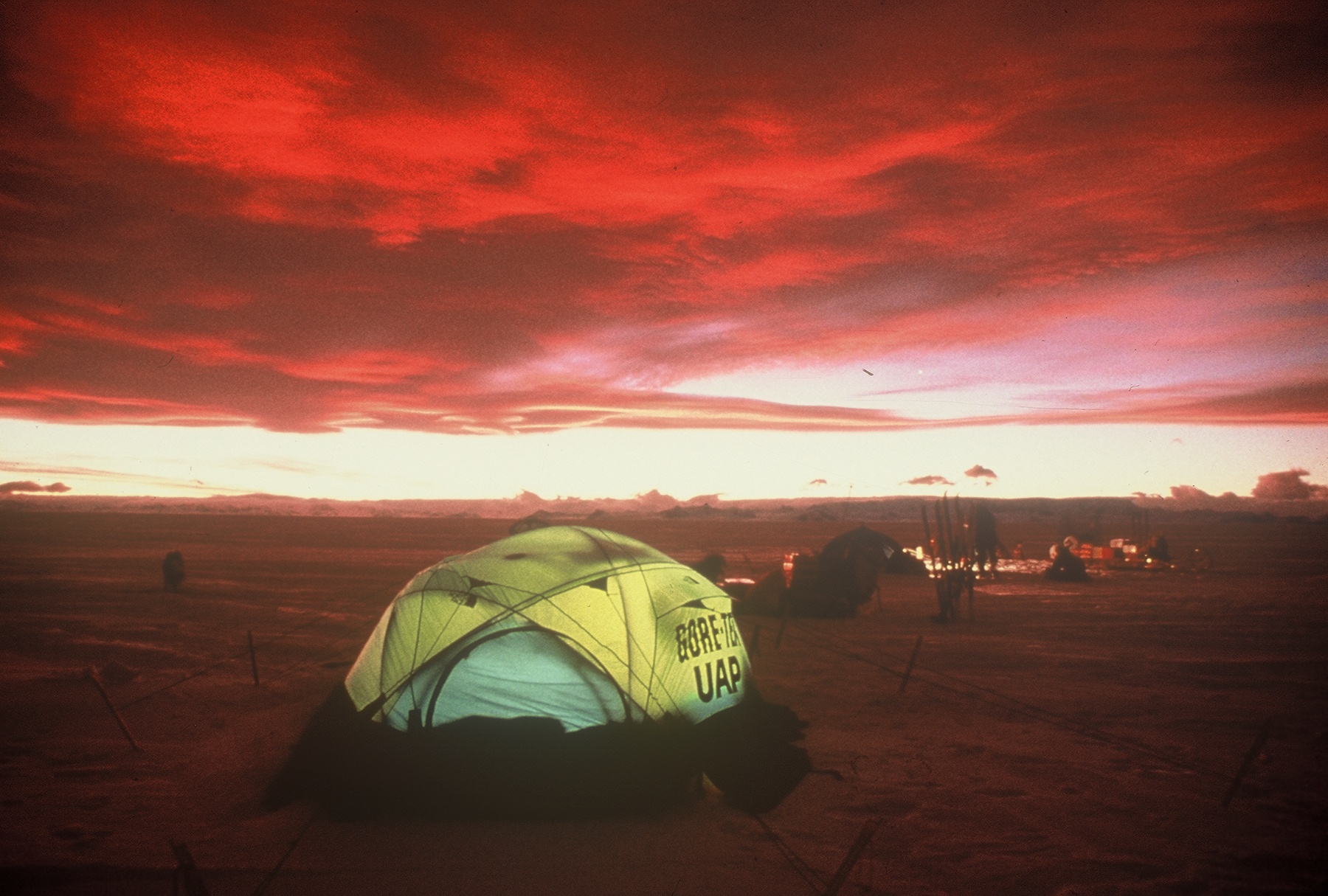 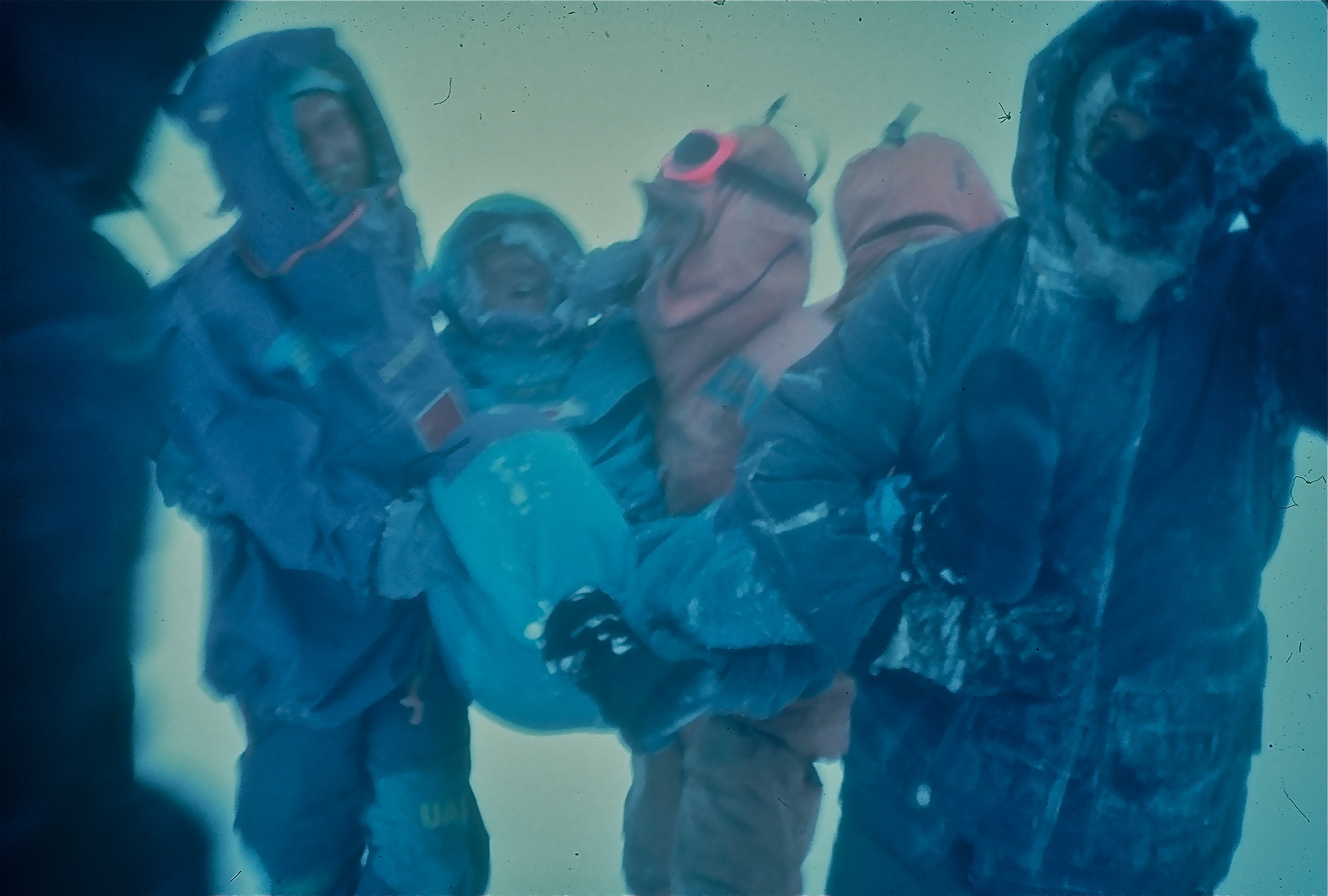 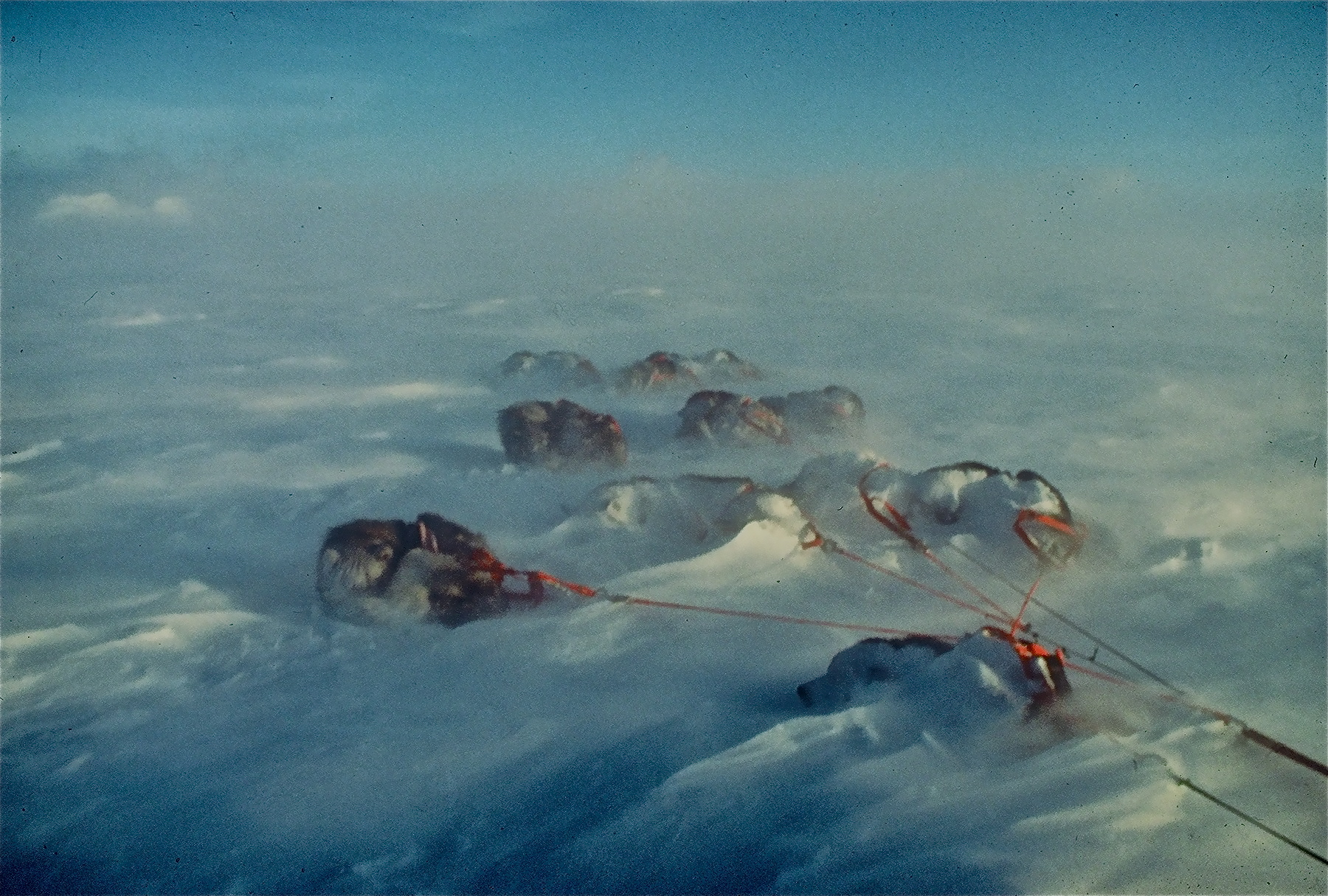 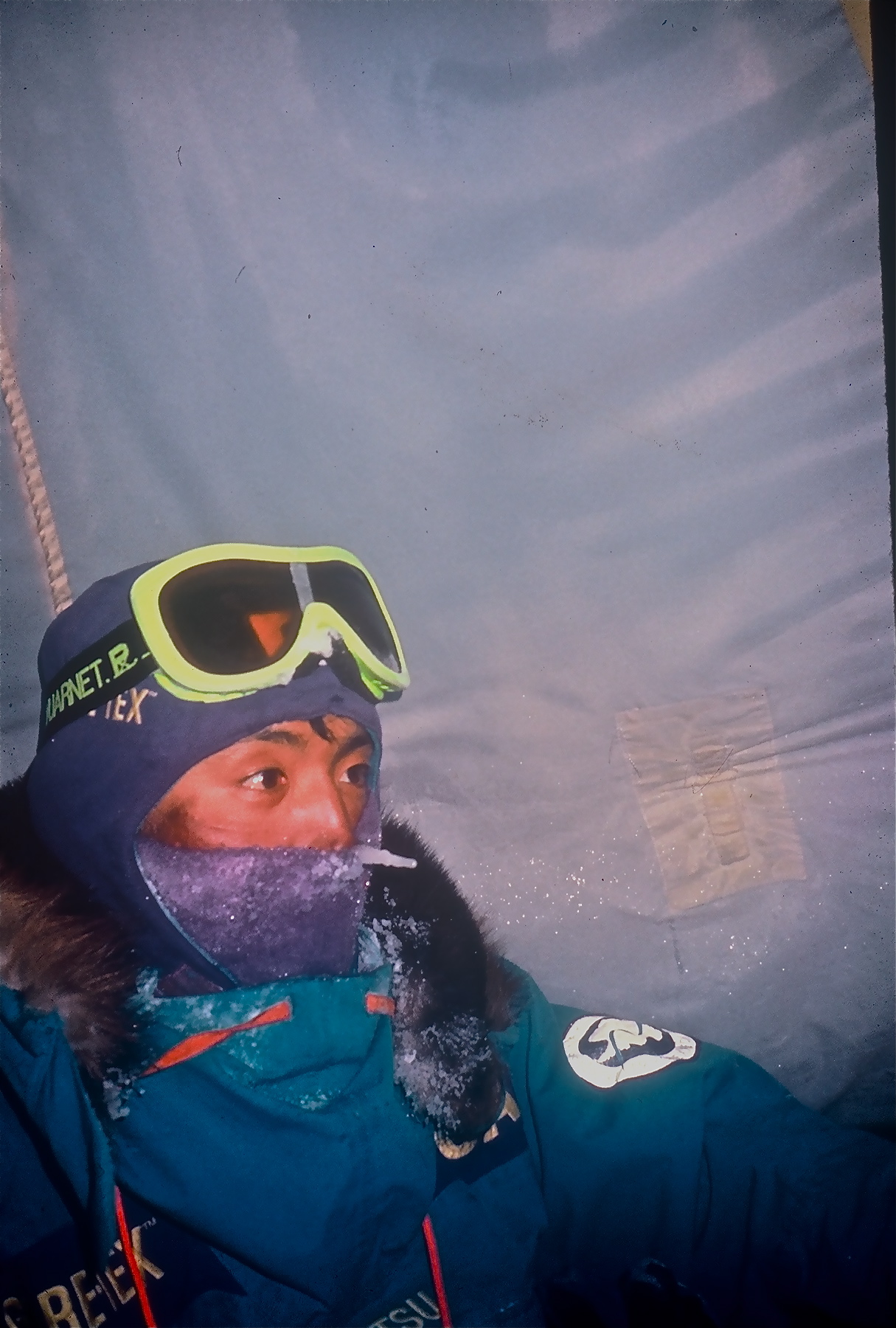 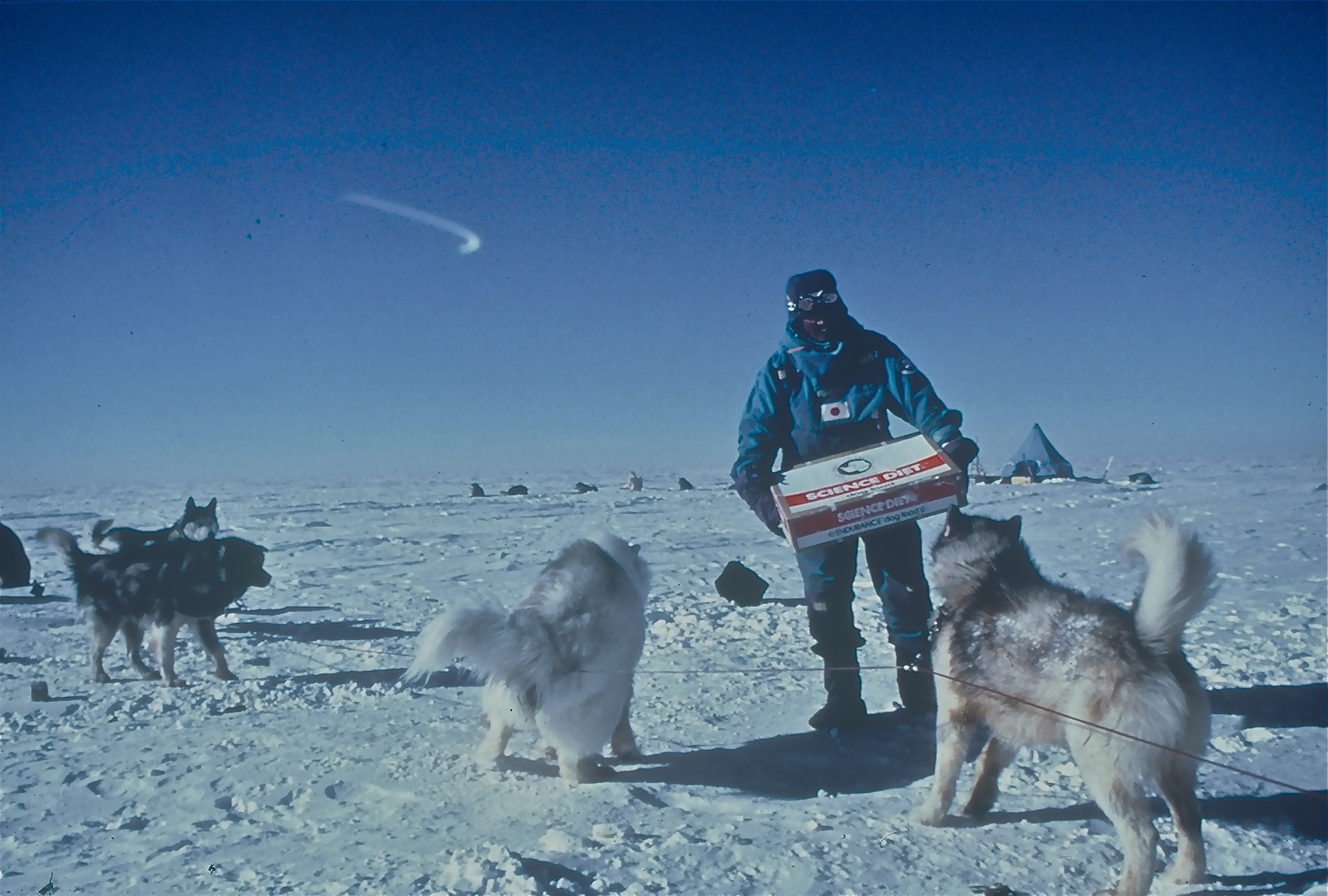 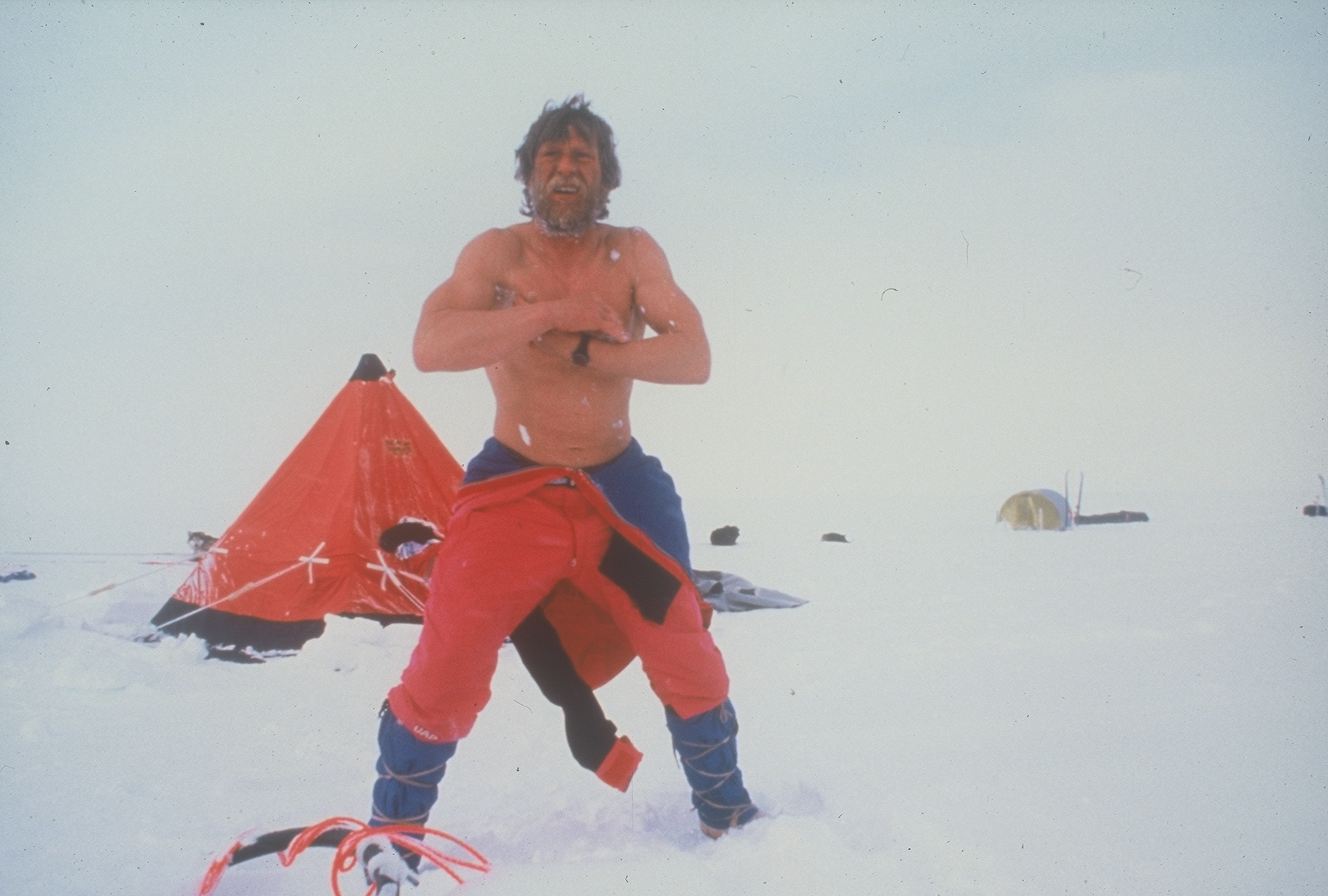 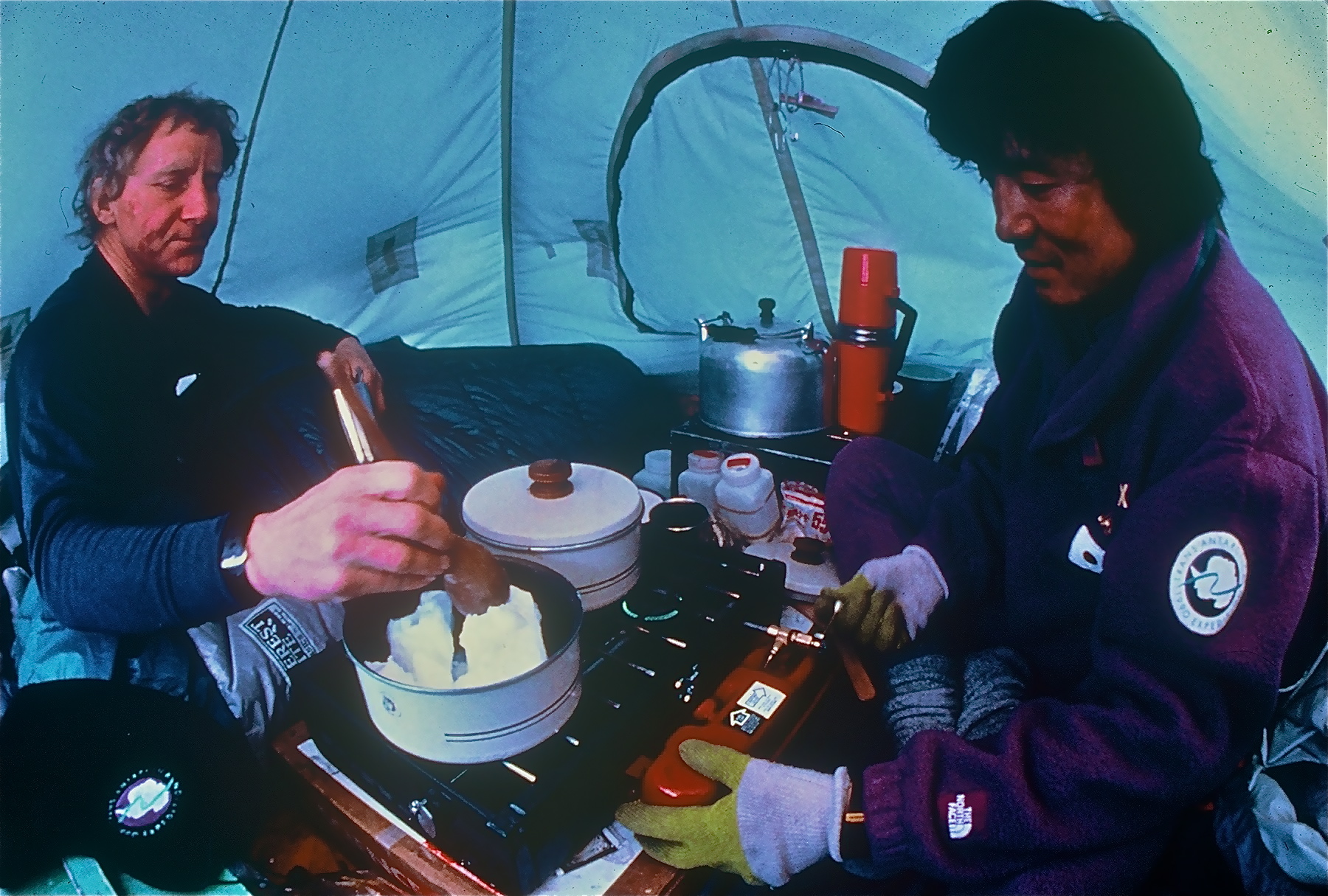 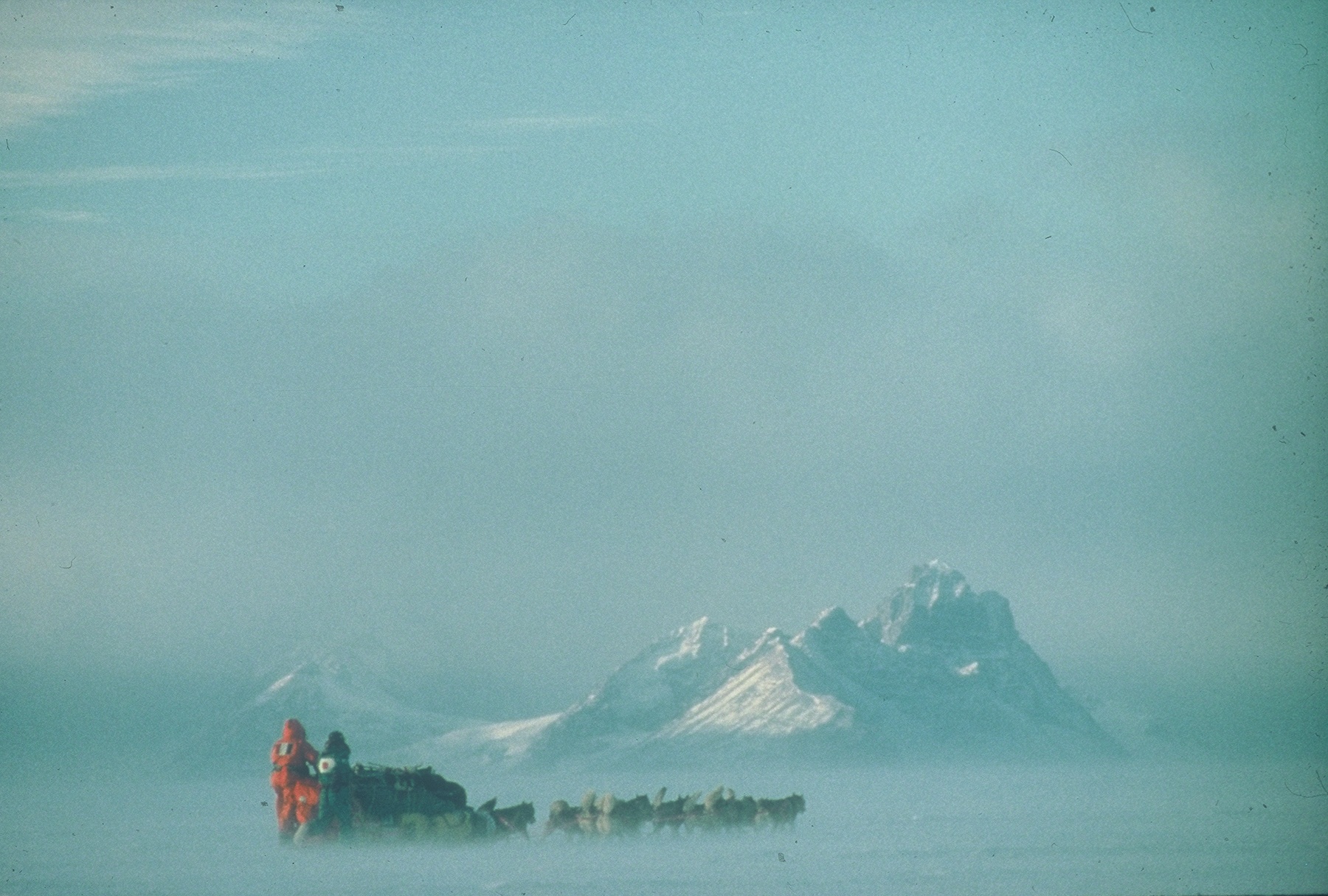 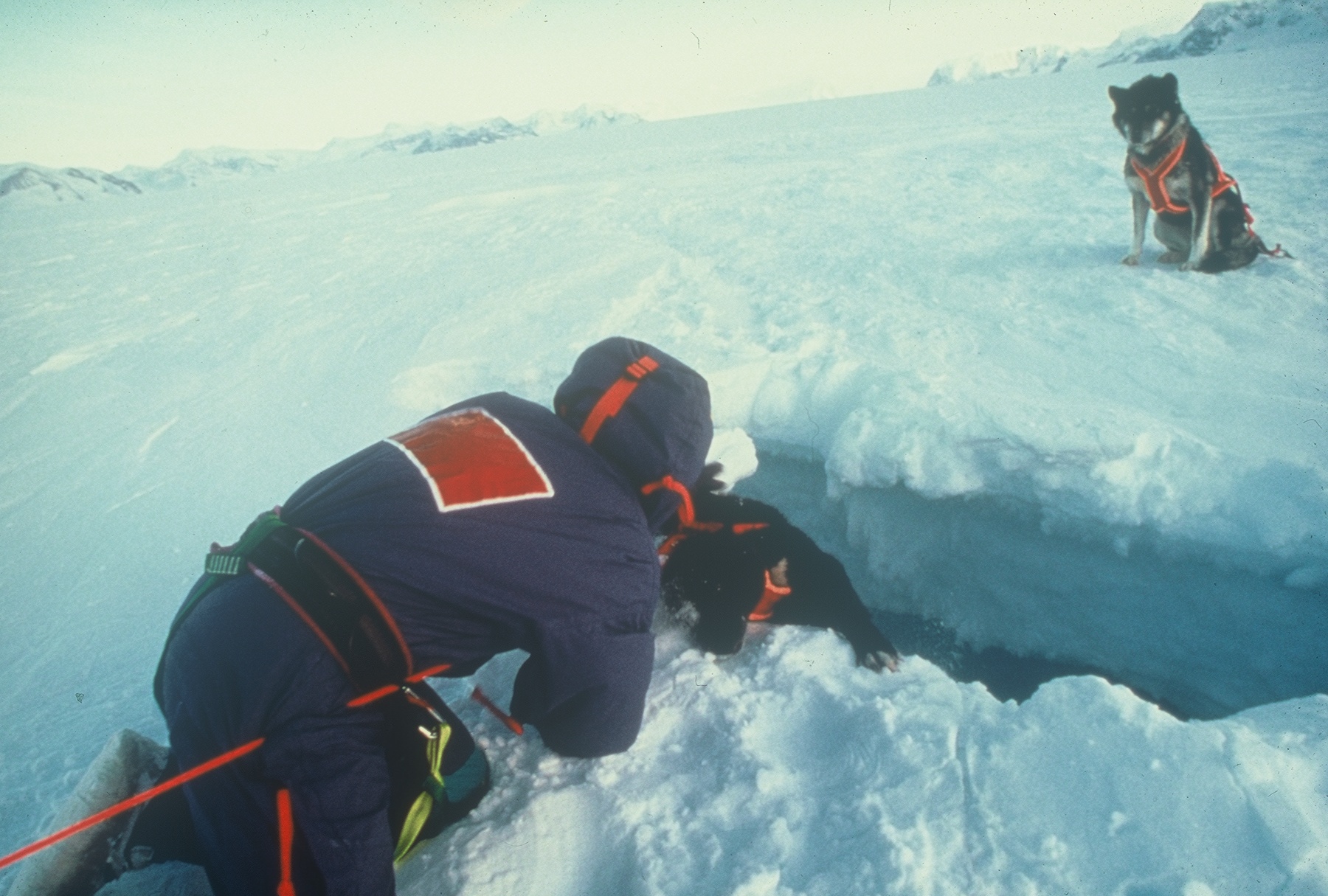 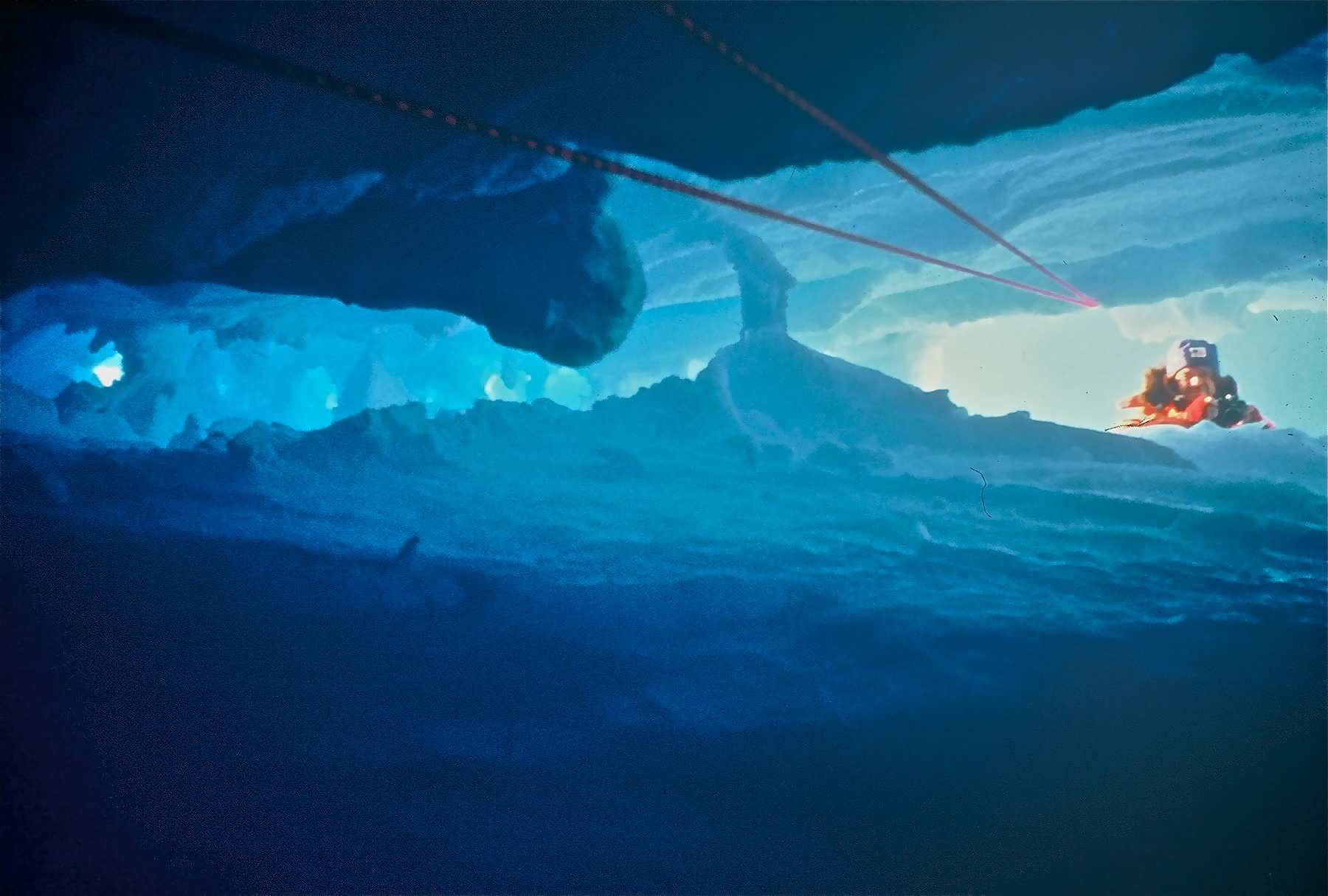 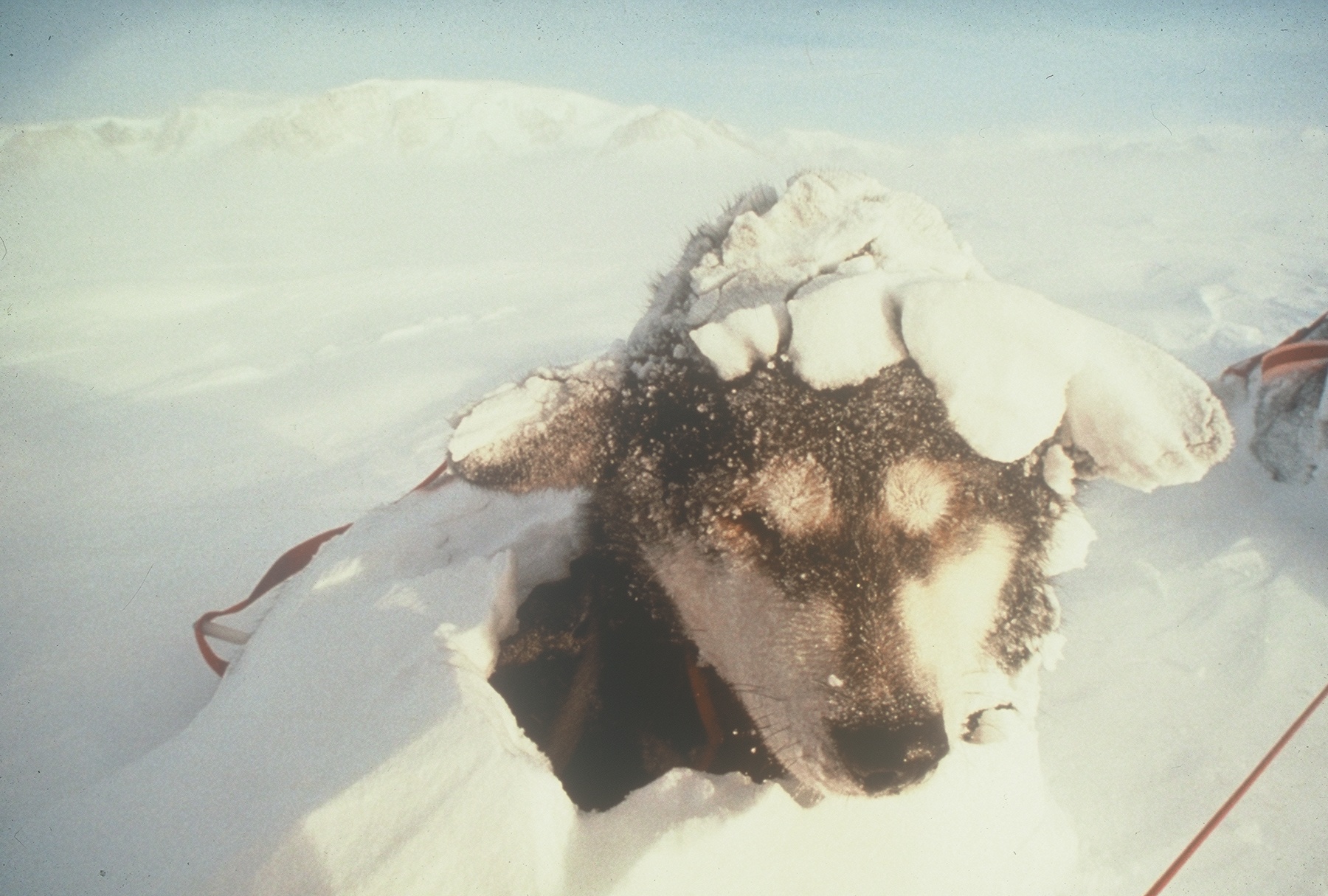 30 years ago from now, 6 adventurers from 6 different countries left for the world's first dogsled crossing of the Antarctic continent.
In July of 1989, this expedition was started. On December 11 of the same year, they reached the South Pole. On March 3 of 1990, they completed this 4000 miles journey. During these 8 months, they had challenged the harsh nature together getting over the wall of luggage and culture.
The word which inspired them was “THINK SOUTH.”
“We, International Trans-Antarctica Expedition have reached the South Pole today. And now, we send a message to people all over the world from the South Pole where all countries intersect at one point.
We believe people can live together beyond ethic, culture, and nation even in this difficult situation. And we hope the spirit of International Trans-Antarctica Expedition to be a help to build a better world.
With the wishes that this spirit of peace will spread and cover all over the world like meridian.” (From the message of the team sent from the South Pole in each language of the members in 30 years ago) 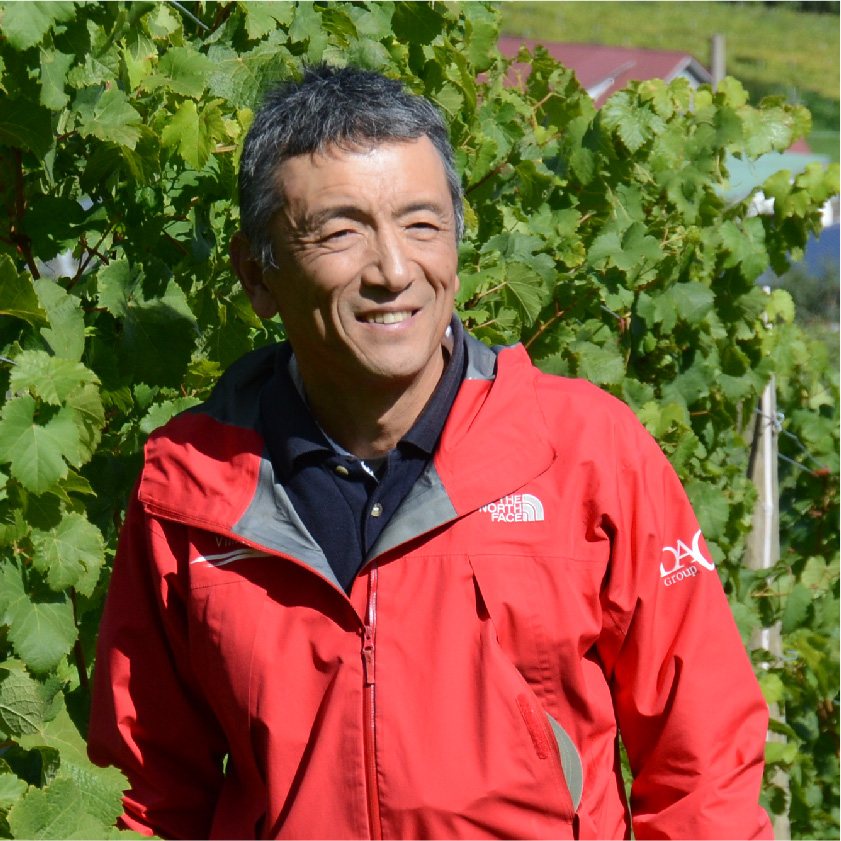 It’s been 30 years since the Trans-Antarctica Expedition. I was 33 years old at that time. Time flies. The 220 days of the expedition was something unforgettable experience for me and I still remember and think about it in my ordinary life from time to time. I still feel like those six adventurers from six different countries are almost my real brothers and I am so glad that many of those people who supported the expedition are still doing well at wherever they are as their existence always make me feel relieved and encouraged. I am also pleased that the expedition of Antarctic continent makes us reunion together and I would like to take this opportunity as its time of appealing the mind-set “THNINK SOUTH” to the world again.

Keizo Funatsu (Japan 62-year-old)
He was born in Osaka in 1956. After studying outdoor education program at Outward Bound School in Minnesota, he worked for outdoor education programs for both young and adult people in various states such as Minnesota, Montana, and Alaska.
In 1988, he joined up with the Trans-Antarctica International Expedition following his accomplishment of traverse of Greenland by dog sled. After this achievement, he moved to Alaska and participated actively in middle and long-distance sled dog races. He received Rookie of the year at the all three major long-distance sled dog races. He also organizes mushing camp in winter Alaska as outdoor education.
He had received Asahi sports prize(1990), TV Asahi big sports prize. Since 2015, he is engaged in a project of winery, garden, and forest conservation at NIKI Hills Winery. 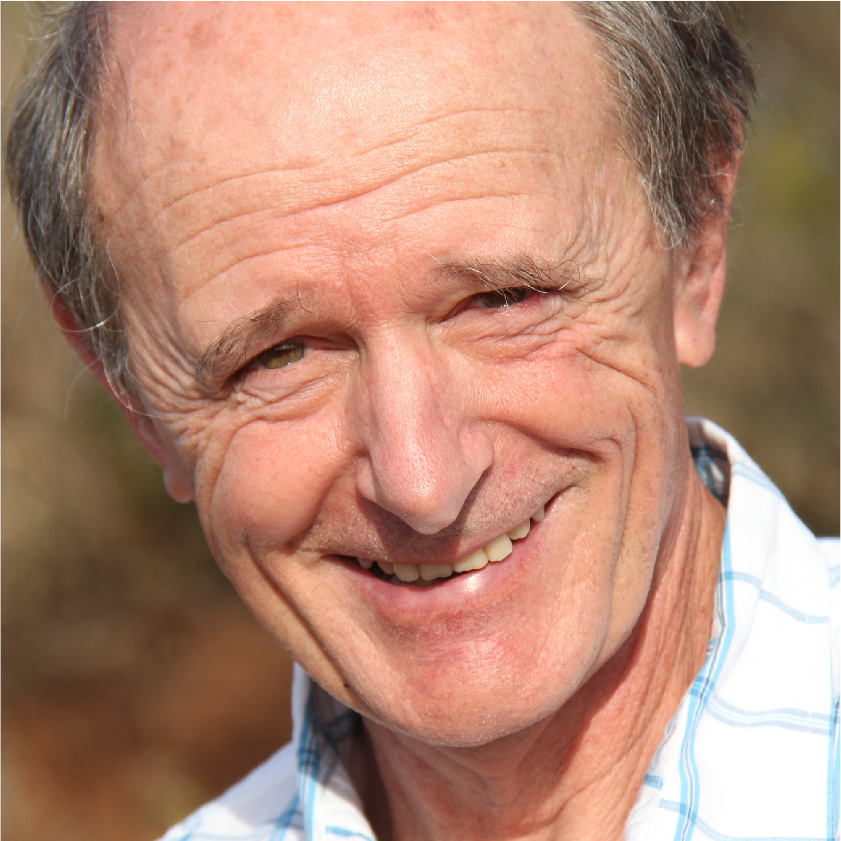 I have done many expeditions but Trans Antarctica is an exceptional accomplishment which gave me the opportunity to open my mind to the world and create unwavering friendships between six people from six different countries such as Japan, USA, China, Russia, Great Britain and France.
All together we are the ambassadors of a successful international cooperation for a better world.

Jean-Louis Etienne (France 72-year-old)
He got interested in medical matters and human psychology in extreme conditions. In order to further his research, he participated in several expeditions in Himalaya, Greenland, and Patagonia.
While his participation in expeditions in the Arctic and Antarctica from a scientific and pedagogical position, he has been disseminating reports about environment protection through media. 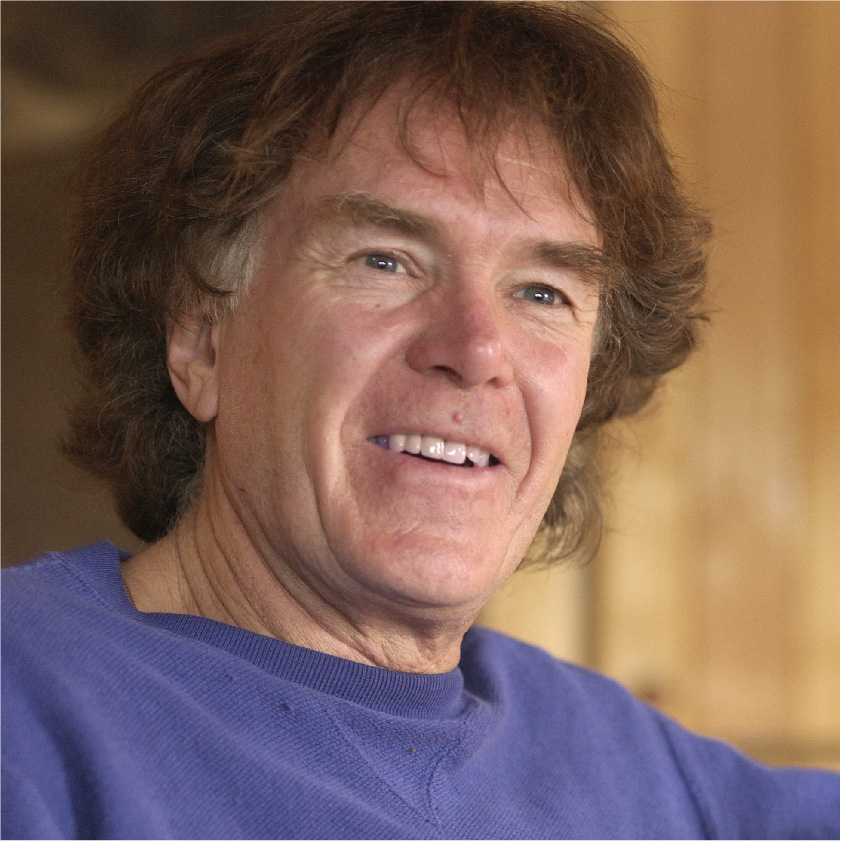 Thirty years ago our Trans Antarctic team we crossed the Larsen A and B ice shelfs in Antarctic. Today these ice shelfs no longer exist. The loss of the Larsen ice shelf on Antarctica demonstrated the seriousness of our complacency in facing the environmental challenges that lay before us. While this isolated environment may seem like another world, each melting drop that falls from the ice ripples out to the modern world with increasing impact. We must act decisively to educate ourselves to the threats and solutions to global warming, and as individuals we must unify around the task at hand. And above all, as we demonstrated when we crossed Antarctica, we can overcome any obstacle through the spirit of international cooperation.

Will Steger (USA 74-year-old)
He is a prominent polar explorer and pedagogue. Currently, he operates the Steger Wilderness Center in the vast nature of Ely, Minnesota. He is engaged in various practices to solve the global warming issue while he works for an environmental education program for both young people and educator. 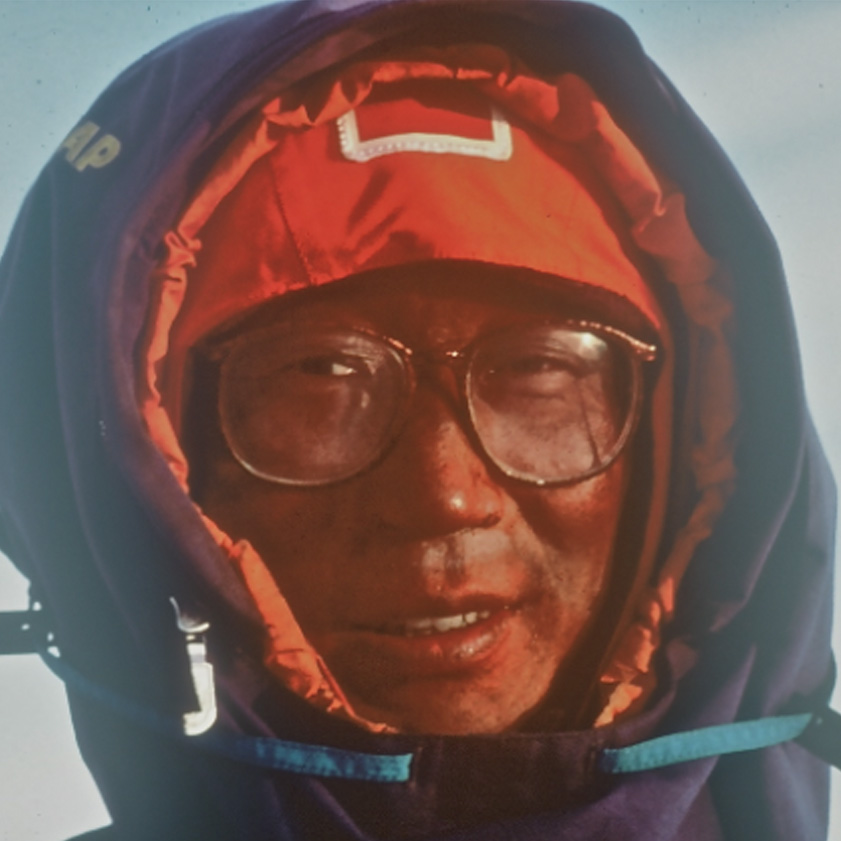 In 2019, it is almost impossible to believe that an expedition at the bottom of the globe could attract a large audience without social media. Yet the record-breaking 1990 Trans-Antartica Expedition was followed by millions of people across the world with its urgent message to protect Antarctica and to prevent climate change. Now, 30 years later, the expedition's message is much, much more urgent: we must work together to save our planet. We are very grateful for the opportunity to share again the remarkable story of these six explorers and to inspire the next generation to cooperate and take action on an international scale.

Dahe Qin (China 72-year-old)
He is a glaciologist with a doctorate of glaciology graduating from Lanzhou University. Qin had held various leading positions in both Chinese and international academic society. He was chairman of the working group of IPCC (Intergovernmental Panel on Climate Change). When Al Gore and IPCC won Nobel Peace Prize in 2007, Qin was one of the members of this board. 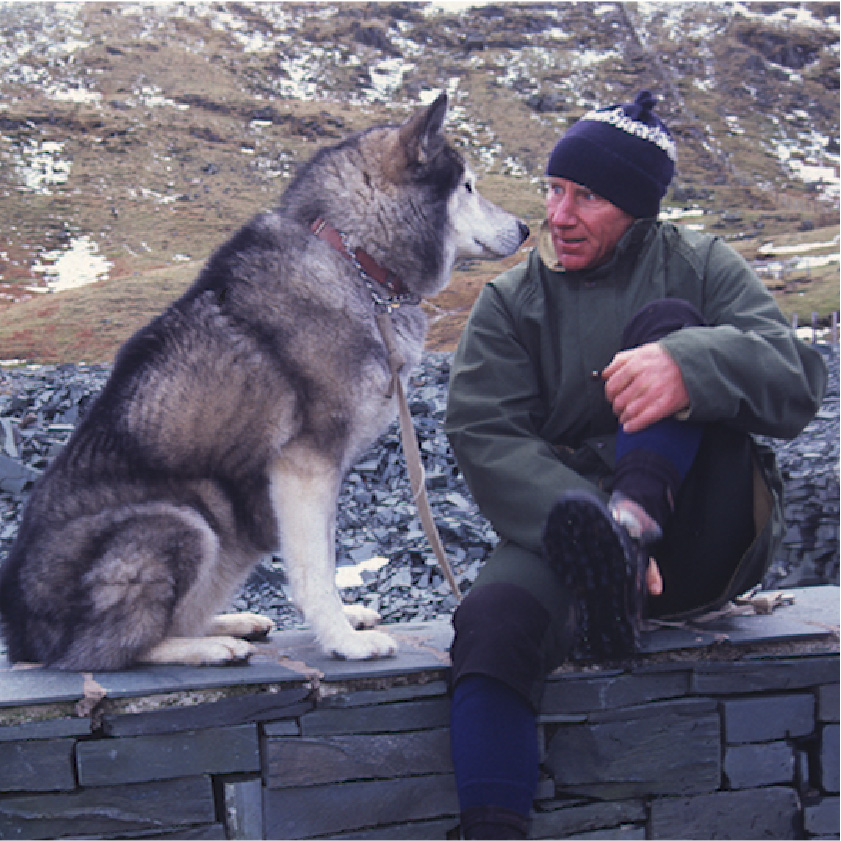 At the time of our Antarctic Crossing thirty years ago, we hoped to convey to the world that, in spite of the differences between the team members in language, nationality and political upbringing, we could work together for a successful expedition. It is only with such cooperation and commitment that we can turn around the devastation we are causing to our planet. Then, thirty years ago, we tried to bring awareness of the man made damage we were inflicting on the Polar regions and the rest of the world. It is now essential that we adhere to changing our ways of life, for our very survival and that of future generations.

Geoff Somers (UK 68-year-old)
He is a well-known polar explorer. As he participated in the traverse of Greenland by dog sled in 1988, he joined the Trans-Antarctica International Expedition in 1990. As a polar guide, he experienced various expeditions such as in North Pole, South Pole, and North Magnetic Pole. For his contribution to numerous expeditions and education, he received the Order of the British Empire. 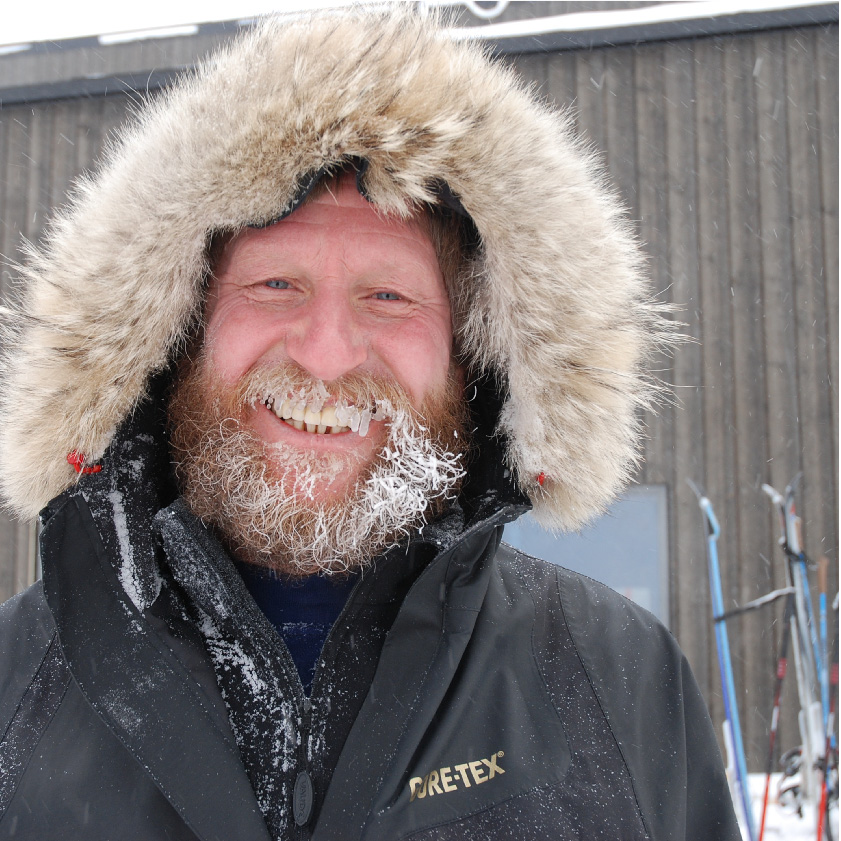 Since our great  Transantarctica expedition was over in 1990, we have had just one meeting , gathered all team members!
It was a reunion in December 2010. We all came to our lovely Ely , Minnesota, from where our expedition actually started in 1988, when we went up North to cross Greenland!
Since that moment my life has completely changed - from polar scientist I transformed into polar adventurer! And I really was enjoyed such transformation.It was really nice to see all friends after such a long break. Eventually everyone got elder,
but young spirit of Transantarctica was alive and continues to be so. Therefore I was very happy received invitation from the youngest teammate Keizo Funatsu for 30 years reunion of the Transantarctica expedition. I am looking with impatience to this meeting
to see all my friends , drink with them the wine from Niki Hills Winery , meeting Japanese  people to share with them with our outstanding experience how not only survive in the harsh cold environment of Antarctica , but keep long term warm and friendly relations among all of us , who were as one Polar Family , and unbreakable unit people and their dogs ,what allowed us to reach the goal.

Victor Boyarsky (Russia 68-year-old)
Viktor Boyarsky is Chairman of the Polar Commission of the Russian Geographical Society and member of the National Geographic Society of the United States. He also assumed office as the first director of the Russian State Museum of the Arctic and Antarctic which was established in 1998. Since 2005, he organizes a field camp Barneo Ice Camp for scientist and tourist. As Russian polar explorer and hydrometeorologist, he received numerous awards.